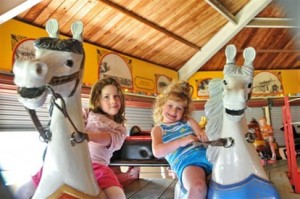 Our C.W. Parker Carousel was built in 1901, complete with hand-carved horses, is our pride and joy at the Dickinson County Heritage Center.
C.W. Parker’s fascination with carousels first began when he came across one while on a walk with his young daughter. After purchasing multiple rides for her, Parker decided the amusement business would be a good venture for him. Parker bought his first carousel soon after, and later decided to try to improve the design by building his own. Thus the C.W. Parker Amusement Company began.
Our 1901 carousel was manufactured here in Abilene, Kansas and originated as a traveling carnival ride. It was sold to Tom Knight, a drive-in movie theater owner in Riverton, Wyoming. When Knight’s health declined and forced him to close, the Dickinson County Historical Society was contacted to purchase and bring the carousel back home to Abilene. After ten years and many volunteer hours, the carousel became fully restored and was named a National Historic Landmark. It is one of only twelve National Historic Carousels in the United States.
Every year thousands of people enjoy a ride on the carousel which comes with a replica ticket souvenir.

There are no reviews yet.